Attorney Tracy A. Finken Interviewed by NBC News on Dangers of Vaping 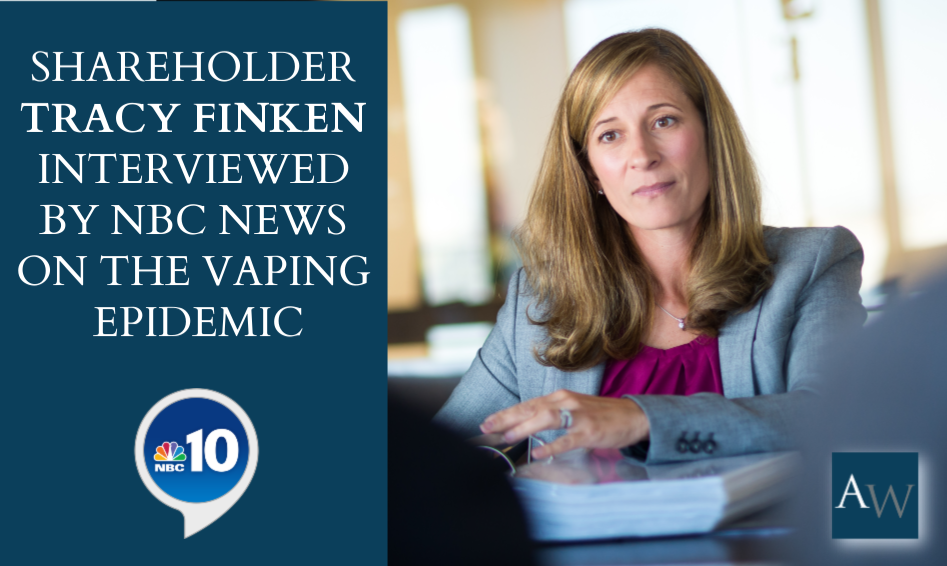 Attorney Tracy A. Finken was interviewed by NBC 10 Philadelphia.

Anapol Weiss Shareholder Tracy Finken joined Rosemary Connor of NBC10 Philadelphia for a segment on the vaping epidemic that ran Sunday, December 23. Tracy Finken represents a client whose thirteen-year-old son is now addicted to nicotine due to Juul vaping.

As a mother of four, Tracy knows first-hand how prevalent the use of e-cigarettes is in schools—and how terrifying that is for parents.

“We made great strides in the last thirty years reducing teenage use of tobacco and nicotine products, and that progress made has been almost completely undone within the past three to four years since Juul has come on the market,” Tracy claimed. “We now have over five million kids in this country that are using electronic cigarettes and nicotine that likely would never have picked up a combustible cigarette before this.”

Teenage brains are still growing, and nicotine, a highly-addictive substance found in both e-cigarettes and combustible cigarettes, is especially problematic for adolescents.

“The science has been very clear for many, many years what kind of effect [vaping] has on the developing teenage brain,” Tracy argued. “It is similar to a brain injury for kids—addiction to nicotine. It predisposes them to using combustible cigarettes down the line, as well as other addiction issues long-term.”

Tracy argues that Juul and other e-cigarette companies employed marketing and product techniques to appeal to kids, including using flavors like fruit punch and favorite childhood cereals, creating sleek and electronic devices that are easy to hide, and insinuating that vaping was a safe alternative to traditional cigarette use.

In addition to connection to teenage addiction, vaping has also been connected to many cases of serious, acute injuries that Anapol Weiss is working to secure justice for.

Tracy spoke about what parents and teachers can do to help teens quit using e-cigarettes. She shared the importance of preventative and cessation programs outside of punitive measures. The Anapol Weiss Foundation founded EndVaping.org, a free informational and legal resource for vaping cessation. EndVaping.org representatives partner with schools to speak to administrators, teachers and students on ending the crisis.

“This is an evolving story,” Tracy added. “Every single day, there are scientific article that come out talking about the health effects associated with vaping—with Juul and with other electronic cigarettes as well.”