Problems that can Cause Brain Damage at Birth

Parents-to-be rightfully expect their medical care provider to detect and respond to any condition that may injure their unborn baby. When certain dangerous situations go undetected and/or untreated, it is unfortunately the newborn and his or her family who must suffer the consequences. Below are a few problems that can lead to preventable brain damage during birth.

Contact Anapol Weiss to speak with a highly qualified birth injury attorney if your child sustained brain damage at birth. We can investigate your situation and determine if medical malpractice is to blame.

Adequate oxygen is crucial to a healthy birth. Without enough oxygen, cells in a baby’s body quickly begin to malfunction and can die or sustain permanent damage. An infant can then suffer from a range of injuries depending on the amount of oxygen, if any, he or she is receiving.

There are two distinct conditions to describe the severity of oxygen deprivation during birth. Perinatal hypoxia means the baby is not getting enough oxygen to the brain and body. Perinatal anoxia refers to a situation in which there is no oxygen. Reduced or lack of oxygen at birth can result in a serious brain injury called hypoxic-ischemic encephalopathy (HIE) and other permanent health problems. 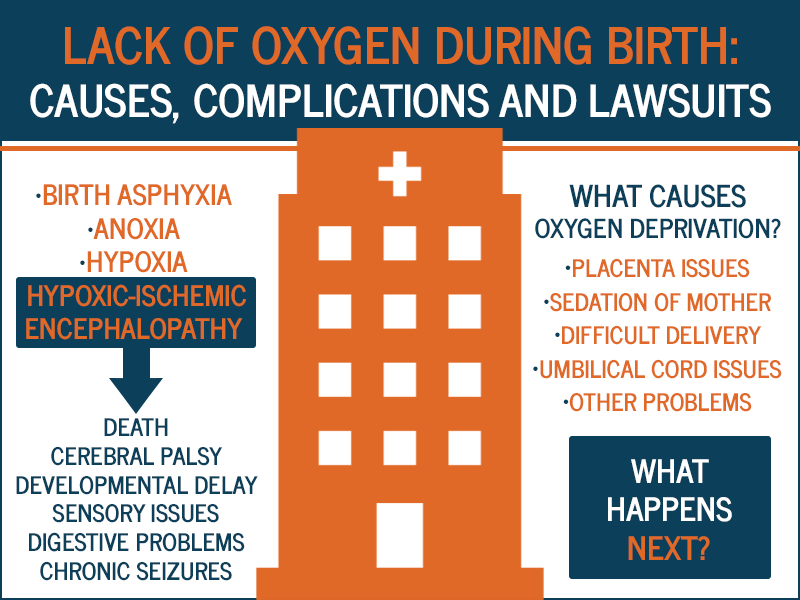 A baby can sustain head injuries before, during or after birth that can result in brain damage.  The improper use of forceps or other medical devices, for example, can injure a baby’s delicate skull and cause permanent brain damage.

Physicians and medical staff must respond immediately to the health care needs of both mother and baby in order to protect them against preventable injuries. They can spot sudden problems by paying close attention to fetal monitoring equipment, which can detect changes in normal heart rate patterns during labor. An abnormal fetal heart rate can indicate fetal distress, which often involves a reduced supply of oxygen.

Other conditions that require immediate attention include:

Every baby deserves the best start possible. When a medical care provider fails to detect and treat dangerous problems before, during or after birth, they put a newborn at risk for permanent brain damage. If it happened to your child, we can help.