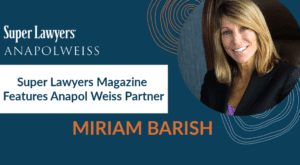 Miriam Barish, Partner at the law firm of Anapol Weiss, has created a unique specialization for herself in protecting the rights of women. She was featured in Super Lawyer’s 2019 Pennsylvania Super Lawyers Magazine detailing a harrowing incident involving the assault of two women, one of whom died. The survivor and grieving family of the deceased woman chose Miriam Barish to represent their case.

“I think the living victim was comfortable sharing this horror story, these intimate details, with me, and they resonated,” she says. “These things made clear to me this was somewhere I could be effective.”

When this case went to trial, Miriam faced a complex obstacle—the murderer was not an actual employee of the management firm at the time of his crimes. “Because the perpetrator no longer worked [for the property management firm] when the heinous sexual assault and murder occurred, I could not argue a typical theory of agency liability,” says Barish.

Instead Barish argued a “negligent introduction theory,” persuading the court to impose liability based upon the cleaning company’s negligent conduct. They had introduced her clients to the worker without conducting a criminal background check, which would have revealed the perpetrator’s violent criminal record. Had they done a criminal background check, they would have known he was on probation at the time he was hired.

The case, a first of its kind, was tried successfully before a Philadelphia jury. Barish says she was able to get a “significant amount of compensatory damages.” And following this groundbreaking win, Barish’s practice has evolved. Her female-oriented liability niche also includes work for a woman who was sexually assaulted as a patient in a psychiatric hospital; a woman robbed and assaulted in a parking lot; and a girl who was assaulted on a school bus.

“Other lawyers might have turned my client down,” she says. “I take creative and tenacious approaches to every case. I’m not looking for flawless liability to bring to a case. I recently had a workplace discrimination case. My client wanted the job she was entitled to and was not granted on the basis of gender and race. But she wanted her sisters in the workplace to have better opportunities, too. And as lawyers you have to firmly believe—and I do—that when things get corrected, we have bettered the world.”

Miriam was raised to be an independent woman, she reflected. Now, as a mother of three daughters and one son, she says of her motherhood: “I’m perpetuating this in them now: that women should be able to rise and fall on their own.”

You can read the original article here.