Can more be done in the design of helmets to reduce the risk of head injury? The answer to the question is frustratingly simple: Yes.

To understand how helmet safety can be improved, we first need to understand how the brain is concussed or more seriously injured. Brain injury, which runs the gamut from a low-level injury (e.g., sub-concussive) to the gravest of injuries (e.g., major bleeding throughout the brain and/or diffuse injury to the axons), is caused by excessive impact force or excessive acceleration or motion of the brain. These injuries can happen by direct impact to the helmet-covered head or from violent movement of the head when another part of the body is struck and the head, tethered to the body by the neck, gets tossed about. Regardless of whether the brain is accelerated from direct impact to the head or movement of the head from impact to the torso, it’s the motion of the brain inside the skull that causes these injuries.

The science of brain injury causation is very well developed, but, unfortunately, the development of head protection equipment has lagged-behind. Here’s what we know about these two interrelated topics. First, we know that protection against skull fracture has been fairly common when the helmeted-head remains covered and the helmet’s structure successfully ameliorates the impact forces. So, the first order of business is to design the restraint system to keep the helmet on the head during foreseeable crashes. The second order of business is to include a hard-shell to deflect some of the force of impact and spread the force over its surface, thereby reducing the forces delivered to the impact area. The third order is to design a (multi-layered) liner capable of absorbing the remaining forces via deformation to mitigate acceleration to the brain.

Helmets are made to meet both industry standards and a basic federal standard (motorcycle and bicycle helmets only). These standards are based on decades-old testing (circa 1960s), which allowed researchers to define the impact forces that caused skull fractures in cadaver specimens. These standards also use specific impact surfaces and shapes as depicted below.

Third, depending on the standard, the helmet impact test standard only replicates an impact to portions of the helmeted head at a speed of approximately 13 to 21 mph. Fourth, the majority of the test standards only measure translational/linear accelerations to the test head caused by direct impact–not angular/rotational acceleration to the brain. One exception is the ECE Reg. N 22 (motorcycle helmet) that measures rotational forces in the longitudinal axis of the anvil by using this test rig: 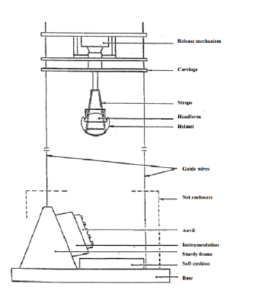 Fifth, the pass/fail test criteria established what was assumed an acceptable risk of injury for a specific impact severity; however, these criteria do not cover the spectrum of brain injuries—both at the sub-concussive level and at the level of force that can result in significant brain injury from rotational acceleration.

In light of these observations, what are the most frequent issues that arise in helmet litigation and are there alternative design solutions to minimize brain injury?

Each of these retention systems provide some level of retention of the helmet under impact conditions. However, the fact is that with some frequency bicycle and motorcycle helmets come-off during dynamic collision events. This usually occurs under two scenarios: the helmet slips off the head while still strapped or the helmet is structurally damaged, which in turn loosens the retention causing it to come off. The most secure retention device is a D ring. Once snug against the neck, it is extremely difficult to remove it without loosening the strap. The one major exception is the “half-face helmet”, which can be easily removed while buckled. Here are photographs depicting the testing of a “half-face helmet”. When the weight was dropped, the fully strapped helmet came completely off the head form. 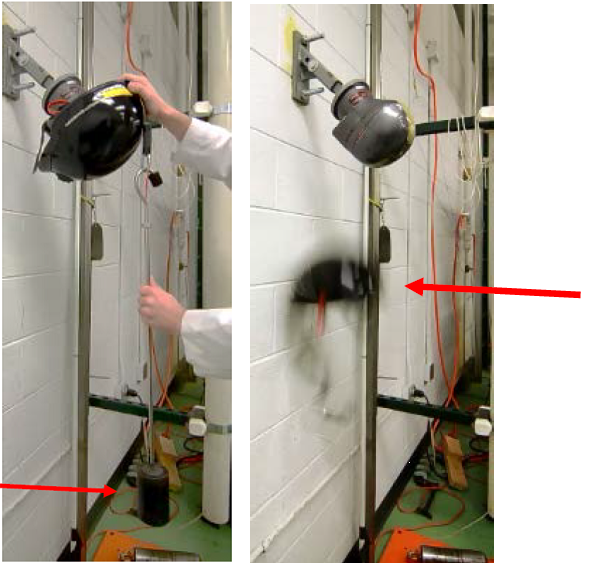 This happened because the strap configuration did not provide adequate tautness to the head. 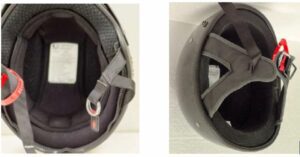 The distinction between these helmets is the geometry of the straps (the “V” anchorge postions). 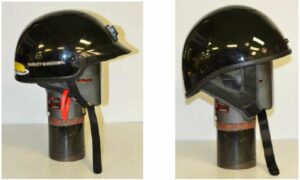 Another foreseeable reason a helmet will either slide up on the head or come completely off is the result of the failure of the shell or liner as depicted below. If the helmet’s shell/liner is structurally damaged, the retention will loosen its tension and allow the helmet to come off the head. 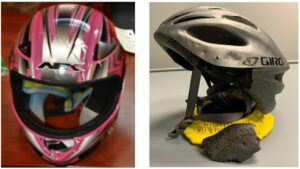 Alternatively, injury occurs when on impact, the brain moves non-axially, rotating as shown below: 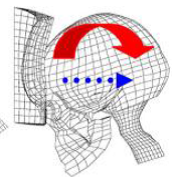 Brain motion and the rate of movement (measured in g’s [translational] and radians per second [rotational]) of the brain is directly proportional to the level of acceleration delivered to the brain after the helmet mitigates some of the force.

Sub-concussive and concussive injuries that don’t lead to catastrophic brain bleeding—but can have devastating long-term neurocognitive effects—can occur at speeds and forces both below and above the test impact speeds. Design solutions must include features to reduce the risk of injuries at both ends of the spectrum and that result from either translational and/or rotational acceleration of the brain. To do so, helmets must include shock-attenuating systems that provide the following benefits:

There are promising engineering solutions to these problems. New bicycle, motorcycle and dirt bike helmets and one football helmet model have developed systems that permit the shell to move somewhat independent of the liner to reduce the rotation of the helmet, head and brain. This can be done by using a movable shell outer membrane or by installing a suspension or shock absorber placed between the shell and the shock-attenuating liner, or by including a plastic piece next to the wearer’s head (yellow below) that keeps the head stationary while the shell moves during the impact. Here are two such systems: MIPS and the Omni-Directional Suspension design.

Further, some helmets are introducing dual-density interior shock-attenuating liners (air-filled pads and foam pads) so that a “soft” and “hard” composite are available to accommodate both low- and high-level forces of impact.

Along with our expanding understanding of how people suffer brain injury comes the responsibility to improve upon safety equipment to reduce the risk of injury. The rhetoric of advertisements promising greater protection but accompanying those promises with warnings that helmets cannot prevent injury they are advertised to protect against is just not right. Manufacturers need to take their research dollars and spend them on helmet design rather than crafty new warnings and marketing tools. Only then can we come close to providing consumers with the protection they deserve.

This article was written by Larry E. Coben and was originally published on https://www.law.com/ in October 2019.