When you purchase a product, you expect it to be safe. You do not expect this product to harm you through exposure to dangerous chemicals, catching on fire, or exploding in your hand or pocket. Unfortunately, not all products can provide this guarantee.

At Anapol Weiss, our esteemed team of experienced electronic cigarette injury attorneys are here to assist you in the event of illness or injury due to vaping. We are accepting cases for both acute and chronic illness and injury, including addiction, myriad lung diseases, and catastrophic injury, including e-cigarette or vape pen explosion. We understand the difficult, traumatic effects an adverse diagnosis or exploding e-cigarette can have on a person’s mental and physical health.

We are here to guide you through the complicated litigation process of an e-cigarette lawsuit so that you can focus on your recovery and healing. We will work to recover damages to compensate for all potential physical, psychological, and emotional losses you have suffered.

With e-cigarettes and vape pens, these hazards are all too common. Despite the marketing of these products as safe alternatives to cigarettes, many serious illnesses and injuries have been tied to vaping. Devices have exploded in the pockets and hands of several consumers, causing serious burns and other life-altering injuries. Illness/injury caused by e-cigarette use can present itself in many symptoms, including dyspnea (difficulty breathing), fatigue, severe cough, chest pain, bloody sputum, and shortness of breath.

Many diagnosed illnesses have been linked to vaping, including:

The vape injury attorneys at Anapol Weiss know that consumers deserve products that are safe, reliable, and fit for human consumption.

People who are looking to cut back on smoking or quit altogether use these devices to help curb their addiction. They provide a similar sensation to smoking a cigarette, just without the harmful smoke.

However, due to aggressive marketing, these devices are growing in popularity among teenagers and young people not just smokers looking to quit.  The sleek, modern design of e-cigarettes and vape pens make them attractive to young people who grew up in an anti-cigarette era. In addition, the vapor in e-cigarettes is made of liquid vape solutions, which come in hundreds of kid-friendly flavors, from Cotton Candy to Bubblegum.

Were You Injured by an Exploding Vape Pen?

Several people have suffered serious injuries and even death as a result of e-cigarette explosions. The dangerous battery acid that spews out of the device in the event of an explosion causes serious, severe, and deep burns on the skin. If the device is in your pocket, you may suffer severe trauma to your legs, chest, or abdomen.

Some recent e-cigarette injuries include:

Researchers have linked these injuries and several more to the use of cheaply produced batteries in these e-cigarette devices. Foreign manufacturers made most of these batteries, mainly in China.

E-cigarette explosions are more common than people think. These devices are volatile and sensitive. Cheap batteries, overheated batteries, substandard batteries, and other difficult to identify defects can lead to serious injuries, disability, and even death. Unfortunately, not all the manufacturers of these devices provide adequate protections for their customers or adequate relief for those who have suffered injuries as a result of their products.

Many of these companies are more interested in protecting their sales and their marketing strategies than their consumers. They will continue to market these products as safe alternatives to smoking and use kid-friendly techniques to increase their user population. Many e-cigarette explosion victims are taking these companies to court to file claim for their pain and suffering – and many of them are winning large settlements.

Lawsuits, Settlements, and Compensation for E-Cigarette Injuries in Philadelphia

In Pennsylvania, product liability laws protect consumers’ rights. These laws enable consumers to file lawsuits for personal injury, wrongful death, and personal property damage and destruction within two years of the incident. Through these lawsuits, you can recover compensation for:

You can file a product liability lawsuit under three categories:

If your e-cigarette explodes, it’s important that you seek medical attention immediately. Leave the device in a safe place for investigation – it is very important that you do not throw it away or dispose of it. Collect a detailed medical report from your doctor, emergency room, or hospital. Then, contact the skilled attorneys at Anapol Weiss.

How Safe Are E-Cigarettes?

E-cigarettes provide a solution for adults looking to kick their nicotine habit, but they are not safe as a long-term habit. The increasing popularity of these devices among young non-smoking teens and young adults is contributing to a new generation of tobacco users.

A recent study by the American Physiological Association into the effects of e-cigarettes on lung health has found that inhaling vape smoke may be more harmful to your lungs than smoking a cigarette. The widely popular vape solutions that power these devices contain dangerous chemicals such as:

While food additives are safe to eat, research is suggesting that inhaling them, as well as the other chemicals present in vape solutions, can cause severe lung inflammation. Even short-term use can cause this inflammation, leading researchers to wonder what the long-term effects of these devices actually entail.

Other health risks involving e-cigarettes include:

While the potential health impacts of e-cigarettes are alarming, there is a more present danger: explosions. The cause of these explosions seem to be the batteries and the cheaply made materials that are in these e-cigarettes.

We all know the dangers of cigarettes. The presence of harmful chemicals in addition to addictive nicotine and the risk of lung cancer is enough for many Americans to seek an alternative to smoking them. Cigarettes are notoriously addictive, and the habit is extremely hard to kick, which is why e-cigarettes act as a form of relief.

Most e-cigarettes and vape pens are composed of:

Users suck on the mouthpiece and the liquid solution, which can come in a variety of flavors such as Cookie Dough or Fruit Loops, heats up, producing a vapor. This vapor comes back through the mouthpiece into the user’s mouth, who then inhales it. The nicotine content of these solutions ranges from none at all to very high levels, usually between 24 to 36 milligrams of nicotine per milliliter of solution.

The Popularity of E-Cigarettes and Vapes in Philadelphia

Today’s population of young people did not grow up in a world where people smoked cigarettes indoors, where restaurants had designated smoking sections, or when the dangers of smoking were a mystery. They have received anti-cigarette education and programming and, for the most part, do not smoke as much as their parents and grandparents have.

According to the Center for Disease Control, cigarette smoking has declined steadily among the American population over the past decade. However, e-cigarettes and vaping seem to be replacing this trend. It is a common misconception that e-cigarettes are not dangerous – the CDC has stated that these devices are not safe for young people, non-smokers, or pregnant women.

Consider these surprising statistics since e-cigarettes first appeared on the Chinese market in 2004:

These trends are very concerning, especially since these devices have a penchant for exploding and causing severe injuries. Its also important to note that many times these injuries and explosions go unreported, so data is limited. If young people continue to expose themselves to these devices, they risk serious burns, skin damage, and other hazards. 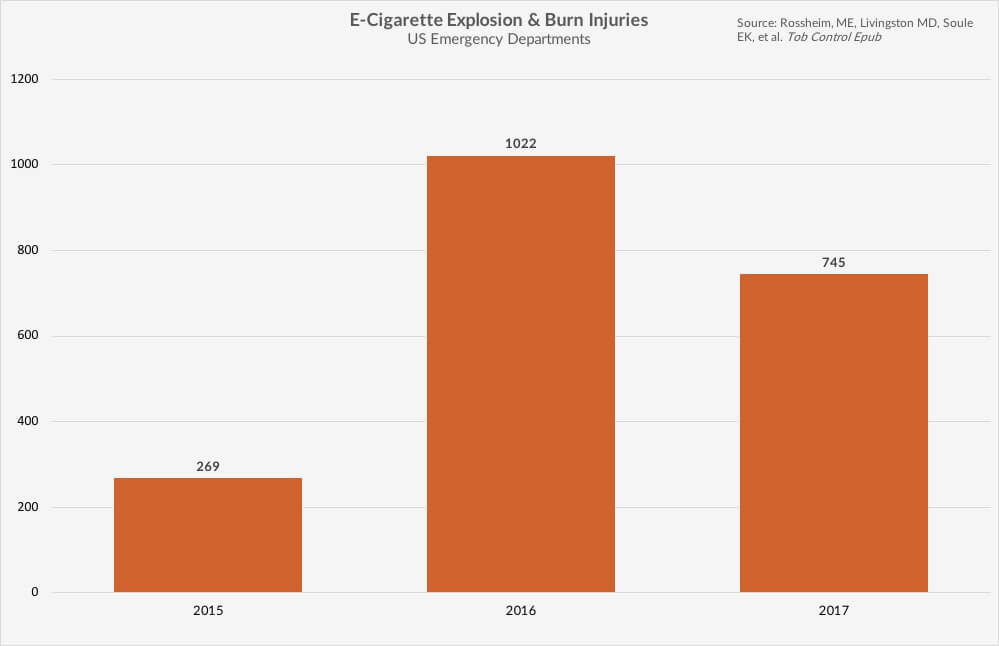 Identifying the actual numbers of e-cigarette injuries can be difficult because tobacco products currently are not regulated by the FDA CTP. A closer analysis of NEISS data gives a better picture on how many reported burn injuries there actually are. From 2015 to 2017, there was an estimated 2035  (95% CI 1107 to 2964) e-cigarette explosions and burn injuries that were reported at US hospital EDs. The severity of each instances varied greatly, but the majority of injuries were primarily young males and most injuries occurred on the upper leg.

Our expert product liability lawyers are here to help you recover fair compensation for victims of e-cigarette illness and injury in Philadelphia. We will conduct a full investigation, collect evidence, gather any witnesses, and build a compelling case for your vape lawsuit. Contact our Philadelphia offices today to schedule your free consultation.

Practice Areas
Keep up to Date Follow Us
January 23, 2023 Legal action can be taken in cases involving power lines and electrical currents
January 3, 2023 Anapol Weiss’s $206 million verdict in “Kids for Cash” case is No. 1 in the Legal’s 2022 list of Top Verdicts and Settlements in Pennsylvania
December 6, 2022 Selecting Safe Toys