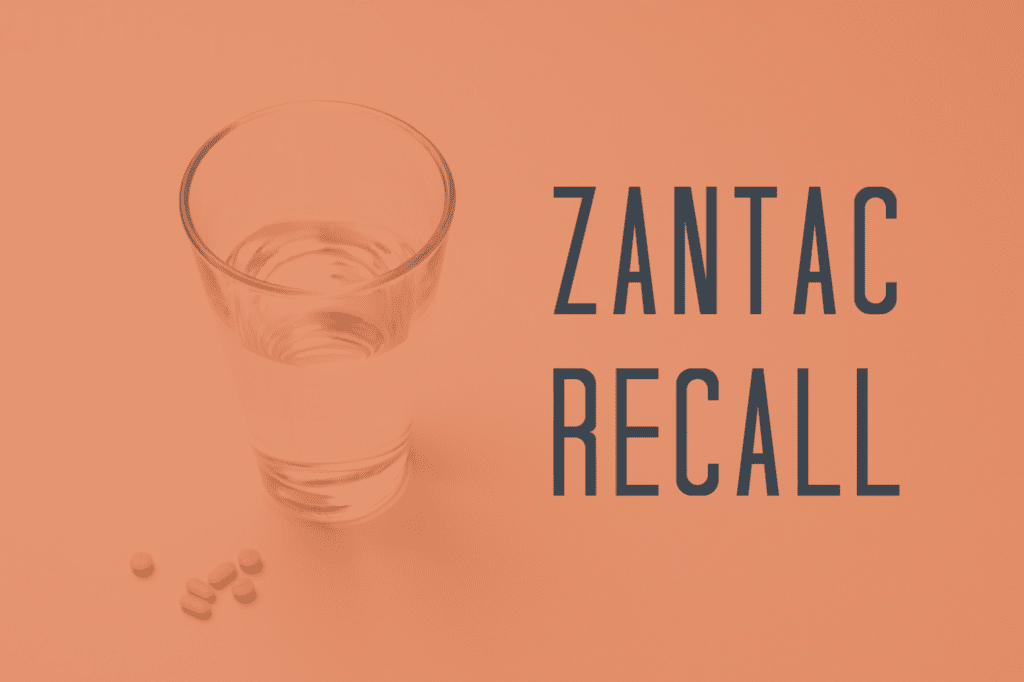 Zantac Recall: Health Risks, What if Means for You, and Possible Legal Options

The recent Zantac recall sent many consumers searching for a new heartburn medication, but unfortunately, some patients are instead looking for medical attention. The presence of N-Nitrosodimethylamine (NDMA), which the FDA has termed a “probable human carcinogen,”, was found in some batches of generic Zantac, prompting the recall. Sold under both its generic name, ranitidine, and several brand or “generic brand” names, there’s no way of knowing how many people may have been exposed to and injured by tainted medication.

The Source Of The Zantac Recall

After an independent lab reported finding the carcinogen, prompting consumers to demand a voluntary recall on Zantac and generic alternatives, the FDA conducted their own research. In their studies, they noted that various generics did show low levels of contamination, but it was in amounts generally believed to be safe in levels no worse than what is found in some commonly consumed foods. This prompted an initial statement from the FDA reassuring the public that testing was being done, but that there was no reason to stop taking ranitidine at the time.

Several manufacturers, motivated by the increased scrutiny from both independent labs and the FDA began a Zantac recall of their own products. This voluntary recall was not compelled by the FDA, although the FDA announced these recalls even as they formalized increasingly strict testing standards for NDMA in ranitidine.

Additional research, however, showed storage at higher temperatures, such as those found in non-climate controlled warehouses or transport trucks, caused a faster rise in NDMA levels than when ranitidine was properly stored.

Since there’s no practical way for a consumer to know the conditions their ranitidine has been stored or transported in and elevated levels of NDMA pose a higher risk, the FDA announced a Zantac recall of all products containing ranitidine to address the presence of impurities. While a recall is welcome, for too many people, the damage may already be done.

The Health Risks Of NDMA

NDMA is no stranger to the medical community. The EPA warns that over-exposure can damage the liver, kidneys, lungs, and have a range of side effects that can be debilitating separately or in cumulative effect. As a probable carcinogen, there are indications it may lead to several different types of cancer. The potential for these severe health reactions is what led the FDA to issue a Zantac recall, but it never should have been in the medication to begin with.

How NDMA Got Into Ranitidine

NDMA is readily found in gasoline, pesticides, and industrial chemicals, so it never should have been in your medications. While some presence may be the result of improper use of solvents in the manufacturing process, NDMA can also be formed by a chemical reaction, which may be why improper storage accelerates its production in some samples of ranitidine. Neither NDMA nor chemicals that synthesize into NDMA should have been in a product meant for human consumption.

What You Can Do

Whether you take generic or brand name Zantac, the recall is clear that your unused medication should not be taken. Talk to your physician or pharmacist about other heartburn treatment medications. If you or a loved one have been diagnosed with cancer of the stomach, pancreas, liver, intestines, kidney, bladder, or colorectal area, after taking Zantac or a ranitidine generic alternative,  contact us.

Our experienced injury attorneys will review your case and help you understand your legal rights. The recall of Zantac may help prevent further exposure, but that doesn’t address your mounting medical bills, lost wages, pain, or suffering. We’re ready to help you get the compensation you deserve so you can get the medical attention you need while alleviating the financial burden your medical complications have caused.

Current litigation is based around the belief that Zantac and other manufacturers of ranitidine knew of the presence of MDMA in their medications, sold them willingly to an unsuspecting public, and concealed the extent of the contamination and the risk it represented when taken regularly.

The result is that millions of patients took medication they were led to believe was safe, when it contained potentially harmful and possibly escalating levels of a known carcinogen. This represents an unconscionable breach of trust between pharmaceutical manufacturers and the people who rely on them for relief.

With decades of personal injury experience, including fighting for those injured by Zantac and other recalled medicines, we have the tools to fight for you. If your medical bills are due to an illness, condition, or cancer you believe was caused by contaminated ranitidine products, we’re ready to help.

Schedule a free consultation today with a Philadelphia personal injury lawyer who can discuss your potential claim.