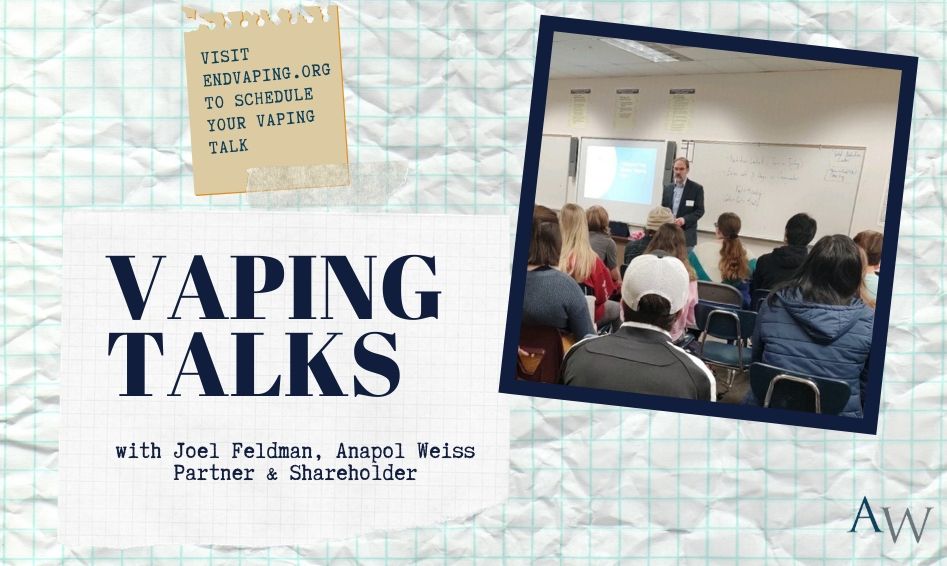 Joel D. Feldman, Shareholder at the Law Firm of Anapol Weiss, gave interactive presentations to students at Cherry Creek High School in Denver, Colorado last week. Eight health classes and 325 kids later, Joel left the high school having informed 9th and 10th grade students about the real, tangible dangers of vaping. It is common knowledge that vape pods contain nicotine, an addictive drug especially harmful to the developing teenage brain. However, many were unaware of the other dangers users face each time they vape. Astonishingly, Joel learned that many of these students were ready to tackle the rampant crisis that is the teen vaping epidemic.

Juul, one of the most popular brands of the hundreds of e-cigarette companies on the market, has been rightfully criticized for marketing their products to teenagers. At Joel’s presentations, many of the students expressed fears of being used as test subjects by the vaping industry. Additionally, most, if not all students, knew someone personally who was addicted to Juul. Each class estimated that between 60-80% of teens in school had vaped at least a few times, and that at least 30-40% do so regularly. Each class shared that they had witnessed many middle schoolers (11-13 years old) vape, and that it wasn’t unusual to overhear kids saying that they needed their Juul fix. Many have unsuccessfully tried to stop vaping several times.

Joel’s presentation produced some astonishing revelations in the students, such that the practice of vaping before 18 increases the likelihood of smoking cigarettes, and that second-hand vaping poses a risk to an individual’s immediate health as well. The students expressed disbelief when they learned that most of the vaping market is comprised of people under the age of twenty-five.

Preliminary research shows that flavoring in these vapes have not been tested for inhalation, potentially causing health risks such as popcorn lung, seizures, pneumonia like symptoms, limb amputations, and even death. Recent studies show that over 5 million kids are vaping, and one in four high school students have vaped in the last 30 days. If you or anyone you know may be interested in an educational, interactive presentation for teens at your school, free of charge, visit endvaping.org to schedule your consultation.

Give us a call if you or anyone you know has been diagnosed with a vaping related injury. Anapol Weiss will investigate your claim at no cost to you.