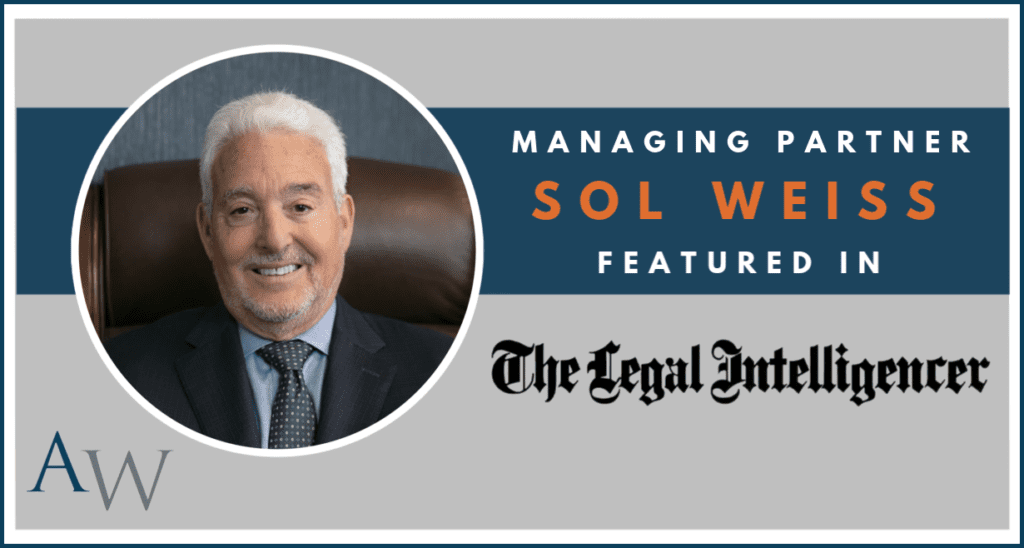 Anapol Weiss Managing and Name Partner Sol H. Weiss was interviewed for the article “Why Pa. Firms are Making Cost Cuts, but Avoiding People Cuts,” that appeared in a recent headline article of Philadelphia’s The Legal Intelligencer and on Law.com.

The article discusses major changes happening within some of the most prominent Philadelphia law firms. The coronavirus pandemic has impacted nearly every business across the country. For many companies, the virus has forced mass layoffs, furloughs or employee pay cuts. The article discusses how budgetary cuts are more common now than personnel changes as firms fight to protect their employees.

Mr. Weiss, who helped found the law firm Anapol Weiss in 1977 and has been practicing law for 48 years, is proud of how Anapol Weiss has been weathering the storm.

Weiss explains in the article that the firm “has pledged to its staff members that they won’t miss a paycheck. The firm has also continued to contribute 35 cents for every dollar employees put toward their 401(k) plans.”

Mr. Weiss explains that Anapol Weiss has been fortunate in its ability to continue to do business as usual in many respects. The firm has migrated to a completely virtual office, and continues to service new and existing clients with little interruption. Despite the mass changes the virus has forced, including social distancing mandates and mass court closures in Pennsylvania, Anapol Weiss hasn’t had to make changes to their team of staff and attorneys.

“We’re still doing depositions remotely and taking discovery remotely—in some medical malpractice cases the hospitals don’t want to cooperate, but eventually they do…On the mass tort side, we can still get medical records no problem, and we’re still able to file claims electronically.”

Mr. Weiss focuses his practice primarily on large mass torts and class actions. He has been instrumental in litigating a number of high-profile mass torts, including Fen-Phen and NFL concussion cases. Mr. Weiss is a frequent guest speaker and contributing lecturer at his Alma Mater Villanova University. He has been named a Best Lawyer and Super Lawyer for consecutive years, and has served in a number of leadership roles in the legal community.