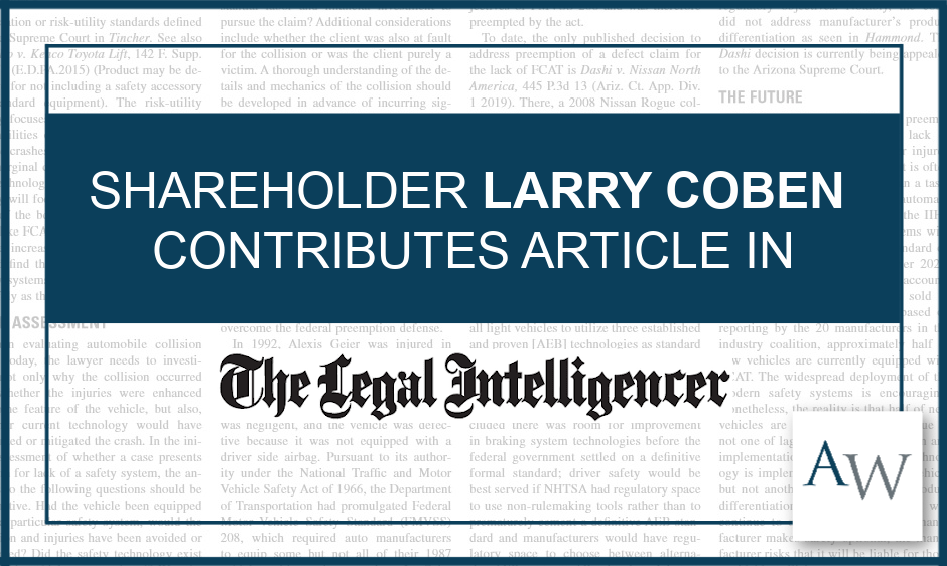 Shareholder Larry Coben was featured in the 1/27/21 issue of The Legal Intelligencer with his article, “Why Restrictive, ‘One Way’ Protective Orders in PI Litigation Are Inherently Unfair.”

In the article, Coben asserts that corporate defendants having the right to legally determine what confidential information they choose to submit in court is unfair, as defendants obviously have a motive to conceal documentation that would be difficult to defend.

“The defendant itself is given the sole and exclusive right to select the documents which would then be subject to the restrictions of the court’s order. Neither plaintiffs counsel nor the court is given the opportunity to participate in the initial selection process. Further, in making its determination, the defendant is obviously guided only by its own subjective criteria.”

To read the article in its entirety, click here.

Larry E. Coben has represented consumers across the U.S. for more than 40 years against companies whose unsafe products have catastrophically injured and killed people. He has obtained many multi-million dollar verdicts and settlements. Larry has served in many leadership positions and is a prolific legal writer, having published three leading textbooks for trial lawyers as well as hundreds of articles.