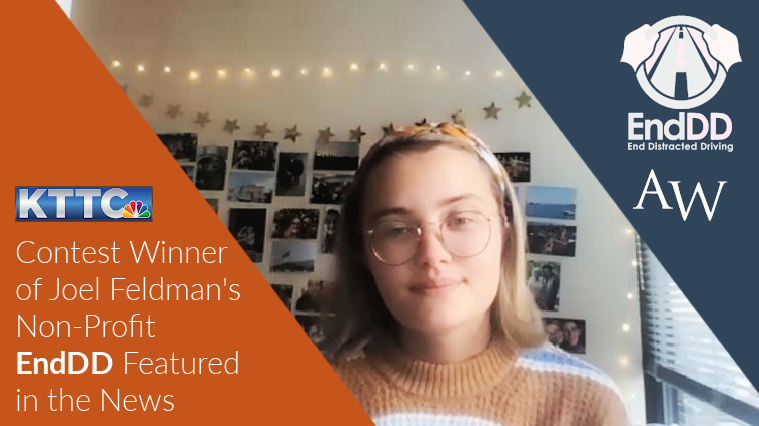 The winner of the 2020 National End Distracted Driving Video Contest was covered in KTTC, an NBC affiliate in Rochester, Minnesota. The contest is meant to encourage positive driving habits in young people and spread the word to everyone on the dangers of distracted driving, which remains a leading cause of automobile accidents and injuries.

Winner Hannah Brumfield created a video compilation of photos spanning her life with a ticking time clock, meant to illustrate how quickly life can change. Hannah, now attending college, was a member of SADD (Students Against Destructive Decisions) in high school.

“It’s a big statement of how your life entire life can change within 30 seconds,” Hannah said.

As the contest winner, Brumfield will receive $5,000 with another $500 to donate to a charity, which she plans to be the Kasson-Mantorville chapter of SADD.

Partner Joel Feldman founded End Distracted Driving after his daughter was struck and killed by a distracted driver ten years ago.

“The message I have to everyone is that I was that driver,” Joel said. “I never killed anyone but I could have. It can happen to all of us just because you haven’t been in a crash yet. Doesn’t mean you won’t be in one today or tomorrow.”

Joel Feldman is a leading advocate for driver safety nationwide. His presentations on ending distracted driving have been seen by more than a quarter million people across the country. Joel is also an accomplished attorney in Pennsylvania, where he has won numerous noteworthy settlements for his clients.