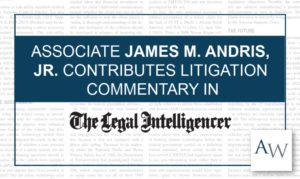 On January 31, 2020, The Legal Intelligencer published an article written by Anapol Weiss attorney, James M. Andris, Jr.  In his article, “Endorsing Ignorance: The CDC Asks Consumers to Trust E-Cigarette Manufacturers,” he argues that the recommendations recently issued by the Centers for Disease Control (“CDC”) on vaping are unacceptably misleading and potentially dangerous.

Andris explains that the CDC’s consumer-oriented recommendations are found on a webpage titled “For the Public.” In mid-January 2020, the CDC updated that webpage to display the following: “Vitamin E acetate should not be added to any e-cigarette . . . product[].  Additionally, people should not add any other substances not intended by the manufacturer to [vaping] products . . . .”  Andris observes that this language leaves readers with the false impression that every individual suffering from a vaping-related lung injury used impure e-liquids.  As such, he asserts that the CDC’s position inadequately warns consumers of the known dangers associated with using vaping products which are in manufacturer-intended condition.

For example, although the CDC mentions diacetyl on its website, it fails to explain how consumers may attempt to avoid it or why avoiding it is crucial to consumer health.  Andris informs readers that diacetyl is a flavoring compound that vaping manufacturers intentionally use when they want their products to taste like butter. However, inhaling aerosolized diacetyl can lead to an irreversible lung condition known as bronchiolitis obliterans (“popcorn lung”).  Andris explains that the CDC similarly downplays the possibility that consumers may develop heavy metal poisoning from vaping (at least one consumer developed cobalt lung subsequent to using her vaping device) or that consumers may be inhaling formaldehyde (a known carcinogen and byproduct of two primary e-liquid ingredients).

Andris emphasizes that government agencies failed to properly serve the public when they understated the dangers associated with cigarette smoke, secondhand cigarette smoke, and asbestos.  Consequently, he contends that the CDC, as an organization upon which consumers rely, should take a more cautious stance toward vaping and e-cigarettes.